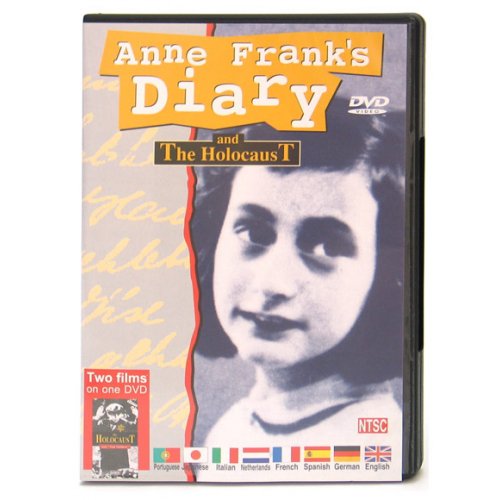 A Film About the Life of Anne Frank", this special film was created by the Anne Frank Centre located in the house of Anne's hiding in Amsterdam. It places Anne's diary in historical context, explaining the rise of the Nazis in Germany, the begin of World War II, and the German invasion of Holland, all while it follows Anne and her family on their flight from their home in Frankfurt into the care of a group of Dutch Christians. Anne's life before and during the years of hiding, as described in her diary, is transformed from history to reality as the camera travels to her old classroom, family home, to the hiding place, and even to Auschwitz, tracing the footsteps of Anne and her loved ones in space and time.

"Anne Frank's Diary" presents the comprehensive picture of the world in which Anne lived, with commentary "by Anne herself" on each place, person, and event, and the most thorough, informative historical narration available, as only the world-famous Anne Frank Huis Museum could provide. From her happy life in Frankfurt to the history of the diary's publication, this film turns what might otherwise seem "just a story" into the living memorial of a most extraordinary little girl.
Originally entitled "Dear Kitty"

-The Holocaust and Yad Vashem-

While many know the figures and the general history associated with the Holocaust ("Shoah" in Hebrew, literally "catastrophe"), few understand the political developments that led up to the rise of Hitler and the drastic social changes that he managed to introduce practically overnight. "The Holocaust and Yad Vashem" chronicles these developments and the "Zeitgeist" ("spirit of the times") of the German people from the end of World War I through the rise to power of the Nazis, their polemical speeches, book-burnings, terrifying rallies, the "German war machine's" weapons manufacture and European conquest. From the seemingly innocent faces of the Nazi Youth Movement to the anything but innocent Nurenberg race laws, "The Holocaust and Yad Vashem" makes clear once and for all the social and political changes that turned this "most enlightened nation" into an army of bloodthirsty monsters.

Behind this "proud nationalist triumph" lurk the scenes from Jewish life under their rule: in the ghettos, on transports, in the concentration, work, and death camps. The true decimation of European Jewry becomes strikingly clear when these scenes of misery and death are contrasted with those of a flourishing, productive, and most happy European Jewish community before the war. Many of these brave souls would not give up their right to the pursuit of life, liberty, and happiness without a fight: the Jewish Underground, resistance and freedom fighters, and the various ghetto uprisings are equally portrayed as crucial elements in the Jewish struggle to maintain morale... and survival. Beginning and ending at Yad Vashem, the Holocaust Memorial Museum in Jerusalem, the film is itself the best answer to the question of who really triumphed in this most horrid catastrophe.

"Yad", the word for "memorial" in the Holy Language, is also the word for "hand"... and truly our remembrance, the cry of "Never Again!", depends not upon empty words, but upon our actions.