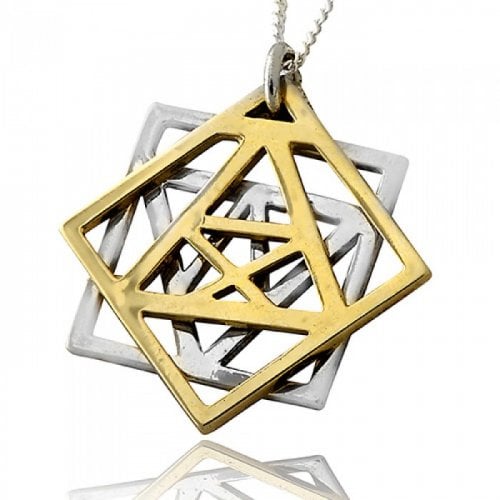 This unique Kabbalah pendant's design includes three shields of 'Tikun Hava' according to the three letters in Eve's Hebrew name, Hava. The first letter in Hava, Heth, equals to the number 8 in Gimatria. Accordingly, Abraham's shield, the outer shield in the pendant, consists of two integrated squares that sum up to eight sides. Abraham shield is traditionally believed to encourage Redemption.

The second shield represents the second letter in Hava's name, Vav, which equals to the number 6. David shield, the shield in the middle, consists of two triangles with six wings. David shield stands for Equality, the surface if the wings us equal to the total surface. David shield enhances inner balance and Redemption of Values.

The third shield, the smallest one, which is called Solomon shield, is a five pointed star which stands for the third letter in Eve's name, Hey, which equals to the number 5. Solomon shield is the Redemption of Act and Beauty.

Dividing this piece into two segments carries symbolic significance: representing Adam and Eve, the combination of the two parts enhances Power and Balance within our souls as well as in the dimension that lies between him and her.